The Early Days In 1907, Lord Robert Baden-Powell of Gilwell (1857-1941) held an experimental camp on Brownsea Island in Poole Harbour, Dorset. This was to try out his ideas about developing a training programme for the young people of Britain and was based on the responsible behaviour of boys whilst carrying out tasks during the Boer War in South Africa. He brought together 20 boys, some from public schools and some from working class homes, and put them into camp under his leadership. The whole World now knows the results of that camp. [Coincidentally, in Scouting’s centenary year, Chalfont St Peter scouts’ Summer Camp 2007 was on Brownsea – part of our campsite being on exactly the same site as the original Baden-Powell camp.] Scouting for Boys was published in 1908 in six fortnightly parts at 4d [a little under 2p] a copy. Sales of the book were enormous and boys soon formed themselves into Scout Patrols. What had been intended as a training aid for existing organisations became the handbook of a new and, ultimately, worldwide Movement. 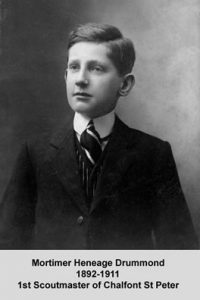 In 1908, Mortimer Heneage Drummond, who lived with his large family in the house that has now become Maltman’s Green School, started a patrol of Scouts at his school, Eton. On 16 May 1908 he was named as a top entrant in a competition called “Race for Camp” with the prize “to spend a fortnight in Baden Powell’s camp”. Unfortunately, through ill-health, he left Eton that July, and, perhaps for this reason, was unable to continue collecting votes for the competition. He did not win a place for this late-August camp and instead returned home. It was then that the first Troop was formed in Chalfont St Peter.

Registration in the early days of Scouting was haphazard, therefore it was November 1910 before the Chalfont Troop with Scoutmaster M H DRUMMOND, ASM S CORNELL and 12 Scouts were mentioned in “Headquarters Gazette”.

Mortimer’s ill health caused his demise in March 1911. His obituary in the Bucks Advertiser reported that 10 members of Harefield Boy Scouts assisted with Chalfont St Peter boys in providing an escort during the funeral. Research has revealed that the two troops used to camp together in Chalfont St Peter.

Scouting continued with a new Scoutmaster, Rev. Charles James Campbell WRIGHT, who was the curate at the parish church. Although he left the area in 1916, he had two assistant scoutmasters, H BRANDON and J THRIFT. The latter is known to have stayed in Chalfont St Peter, appearing on the electoral roll of 1918 in Gold Hill with his wife Sarah, until buried in St Peter’s churchyard in 1933. It was thought that during the First World War this Troop ceased to function, however the situation between the Wars was vibrant and there were 4 Scout Groups operating in Chalfont St Peter, as follows:

1) Some experimental Junior Scout Troops were formed leading to the formation of a Wolf Cub Pack – 1st Chalfont St Peter. A Scout Troop of the same name was re-formed in the same year, and their registration was received in October, 1920. However, these units were closed in 1924 but then re-opened with this name on 14 March 1931. Meetings were initially held in the Church rooms and then later moved to the Scout H.Q. in Hampden Road (now demolished). 2) On 23 May 1922 the 1st Chalfont Colony was registered with Scout Master Herbert STREET, with 24 Scouts. This Group ceased in July 1957. 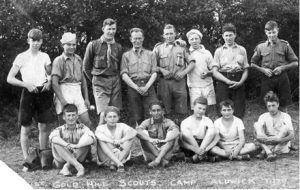 On 17 November, 1924 the 1st Gold Hill was registered under Scout Master Fred B STEPHENS and ASM Fred KEMPSTER with 28 Scouts. They met in the “Congregation Church Schoolroom”. There was no Congregational Church in Chalfont St Peter, but oral history has identified this as probably a room in Goldhill Baptist Church or Hall, where the Group were known to meet until they had their own HQ in Nicol Road. Although the Group included boys from different religious backgrounds, they did parade their flag in the Baptist Church. This Group continued until “they all went to war” and their licence was cancelled on 1 September, 1943. 4) On 2 August 1934 – 2nd Gold Hill was registered. The Cub Master was Cecil AB WATTS, and the ACM Miss Thelma WATTS (his daughter) with 10 Wolf Cubs. This was a controlled Group only consisting of Cubs, and their HQ was St Josephs School, Gerrards Cross – now St Joseph’s church hall. The duration of this Group is not known.

In 1934, all four Scout Groups were operating in Chalfont St Peter within the SE Chiltern District. In 1938 – Chalfont Heights Scout Camp was given to Scouting by an anonymous donor. Scouts and Rovers from 1st Gold Hill cleared and flattened the grounds, pushing a handcart of camping kit there so that they could camp at the weekends. Most of these young men “went to war”, as did their Leaders, and Scouting during the Second World War was greatly reduced. 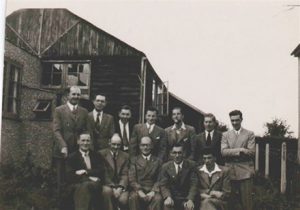 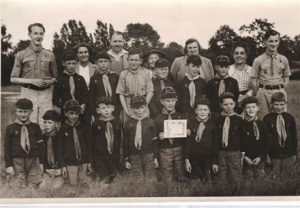 By August 1957, only one Group continued to operate – the 1st Chalfont St Peter (CofE) Group.

On 12 September 1966, the 1st Chalfont St Peter, Group No 12504 (Church of England), changed the nature of its registration from a controlled C of E Group (St Peter’s Church) to an Open Group. This was signed by Acting Group Scoutmaster David RICHARDS. It was effective from 2 November 1966.

The Wolf Cub Pack was renamed a Cub Scout Pack in 1968 when the Scout Association revised the names of the sections.

In May 1969 the Chalfont Venture Unit started.

The current hall was built by the parents and friends of the Group and was formally opened on 13 May 1978 by Ted Hayden (Secretary of the Scouting Association). Through the vision and efforts of parents and leaders at the time, the 1st Chalfont St. Peter Scout Group moved from its cramped and decrepit building in Hampden Road to the modern and spacious premises at Mill Meadow (Gravel Hill).

In 1986, the Scout Association introduced the Beaver Scouting for boys aged 6-8 and this was adopted by the Group. The most recent significant change in Scouting has been the introduction of girls into the movement. There have been some girls in the Group as Venture Scouts for a number of years and in the Scout section since 1997. From 1 January 2007 girls have had formal equality with the boys.

Autumn 2000 witnessed heavy and prolonged rains which arrived when the local water table was already fully saturated – weather forecasters spoke of the highest annual rainfall for a hundred years. On Tuesday 13 December the water was up to the hall door and Scout leaders rang parents to tell them that their meetings that week would be cancelled. Little did they know it would be almost two years before Beavers, Cubs and Scouts in Chalfont St, Peter would return to their own HQ . . . .

The water receded a few days later and the extent of the damage became evident. The wooden floor was wrecked; plaster on the walls was saturated, kitchen units and appliances were ruined, heaters and electrical equipment unusable. The problem was made worse by the discovery that the flood “water” was contaminated by sewage when drain covers lifted, making the whole site a serious health hazard. In February 2001, following more heavy rain, the building flooded for a second time. It was late autumn before it was judged viable to proceed with restoration. Meanwhile Scouting activities continued elsewhere providing stressful challenges for the leaders as their sections relocated to the guide hut in Landsdown Road, the Chalfont Heights Scout Camp, and, briefly, to St Joseph’s church hall. During our lowest historical point, Chief Scout George Purdy dropped by for a strictly private, but immensely moral-boosting flying visit on 17 May 2001 as he traversed between official trips from Holland to Ireland via Heathrow.

After almost two years away and a spend of more than £130,000, the Beavers, Cubs and Scouts moved back into HQ in the autumn of 2002. They returned to a modern, well-equipped building with good facilities and grounds that had been tidied up, with new outdoor equipment provided.

Our scouts are a small percentage of some 28 million scouts Worldwide now taking part in the adventure of the Scouting Movement. In 2007 the Movement celebrated its centenary; as can be seen above, Chalfont St Peter’s Centenary is in 2008.